I began playing drums at age 12. Immediately I got started on private lessons with one of the best teachers around, Frank Russo. Frank taught me all the fundamentals. Proper hand technique, rudiments and how to read rhythms. After 6 months of playing exclusively on a drum pad, I got my first drum set and didn’t look back. At the time, I was very much into Heavy Metal and Hard Rock music. That’s all I wanted to play. Frank, being the well rounded versatile drummer he is, had a different plan for me. While I was teaching myself how to play Metallica tunes and rehearsing with my Metal band that consisted of some like minded musicians from school, he was making me listen to Traditional Jazz and Fusion. Naturally, given my musical tastes, I couldn’t relate to that stuff. I can specifically remember listening to Chick Corea’s “Spain” in my practice room when my band mates showed up for a rehearsal. They laughed at me and wondered why on earth was I listening to such cheesy music. At the time, I couldn’t argue with them because I couldn’t stand to listen to it either. But I knew there was something special about that music, all of it. I knew that there was more to music than just Metal and headbanging. I just needed to condition myself to appreciate the many styles of music that exist out there. If I did that, I would be a much more versatile player and be able to cover all sorts of different types of gigs.

Around my freshman year of high school, I decided I wanted to study mallet percussion. Before I could really start learning the instrument, I would have to learn how to read melodic music. It took some time but thanks to the help and patience of my gracious tutor, the legendary Ralph F. Gambone, I learned how to make sense of all those lines and spaces on the staff. I then began taking lessons from the great Rob Werntz from the Naval Academy Band. Aside from studying mallet percussion with Rob, we also worked on rudimental snare drumming. He would have me play Sousa Marches and Mitch Markovich solo pieces. It was around this time that I decided to join the high school marching band.

Once I joined the high school drum line, I became obsessed with it. Our awesome drum instructors, Ron Frederick and Jim Gick, were very passionate and took the whole drum line thing very seriously. They would make us watch drum corps videos and we would be in awe of how tight and flawless the groups were. My time in the Broadneck Drumline was one of the most fun and rewarding experiences I’ve ever had. The hard work and tireless rehearsals really taught me what it meant to earn a new level of achievement previously unreached.
By the time I reached my junior year of high school, I was certain that my career was going to be in music. It was a combination of my mallet/snare drum lessons with Rob and my drum set lessons with Frank that prepared me for college. I was fortunate to be accepted into the Jazz program at Towson University.

From Fall 1998 to Winter 2004, I immersed myself in everything music. Being a drummer at Towson was very exciting. There was of course percussion ensemble, jazz band and jazz combo ensembles. But, there was also Latin Ensemble and Commercial Ensemble. I got to play so many styles of music, it was exactly what I had been preparing for all through high school. I knew that the more styles I could play, the more work I would get. It was important for me to play it all.

In my junior year, I began developing a fascination with the piano.  I realized how important it was to explore all aspects of music including melody and harmony.  That fascination has resulted in me writing my own arrangements and compositions as well as teaching beginner piano lessons.

My Years With The Bridge 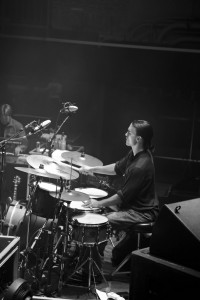 Performing with The Bridge

A year after graduating, I landed a gig with a full time touring rock band. Baltimore’s own, The Bridge. My time spent in college was to prepare myself for any musical situation I would be called on to perform in. Well, I had met my challenge. The Bridge’s two main song writers were both influenced by bands I never listened to. Cris Jacobs, the lead singer/guitarist, was heavily influenced by Little Feat, The Grateful Dead, New Orleans music, bluegrass and old school blues guys. Kenny, the singer/mandolinist/beatboxer, was also heavily influenced by The Grateful Dead and bluegrass but he was also very much into reggae and hip hop. I honestly had never listened to Little Feat or Grateful Dead. I was never asked to play a bluegrass “train” beat. As much as I liked reggae and hip hop, I never really played much of either. I was familiar with a little New Orleans music. Number one being jazz but also the legendary masters of funk, “The Meters.” Needless to say, after doing my homework and studying so much different music, there was still so much for me to learn. I embraced the opportunity and worked hard to familiarize myself with the many influences of the band. I needed to tighten up my more “jazzy” approach and focus on playing for the song. The group did stretch out with improvised sections which is where my jazz influence came in handy but it had to have more of a rock/back-beat foundation and less of a cymbal driven jazz approach.

Along the six year journey as a full-time touring band, we had the good fortune of sharing the stage with many of our favorite musicians. We opened up for groups such as The Derek Trucks Band, Little Feat, Moe, The Funky Meters, Los Lobos, Umphrey’s McGee and The Mike Gordon Band. We actually did a week long tour with Mike Gordon’s band where he sat in with us every night. What a surreal experience that was. Our last studio recording was produced by the legendary saxophonist/keyboardist/
producer from Los Lobos, Steve Berlin. Another surreal and incredibly rewarding experience.

Ten years later, 1,500 plus shows, a whole new appreciation for music I learned to love and the invaluable experiences that have helped shape me into the musician I am today, I couldn’t be more grateful for the life that I’ve chosen. Although The Bridge is no longer touring, we still play a few special shows each year. Being home and not traveling all the time has given me the opportunity to pursue other musical interests. I play with various bands around the Baltimore area.  One of those band’s,  Carey Ziegler’s Expensive Hobby, is a group dedicated to recreating the classics from the 60’s and 70’s. Those classics include music by The Beatles, Frank Zappa, Tower of Power, Chicago and Rush and plenty more. In addition to the more “Rock” oriented music, I love to play “Jazz.” Whether it’s with my own group, MG3, or with other groups, I’m happy to have the availability to do that more.

Aside from performing, I’ve always had a passion for teaching. It’s just as rewarding to me as being on stage but in a different way. I feel the knowledge I’ve gained through my studies in addition to touring and experiencing the music business first hand, has given me a broader sense of what it means to be successful in the very large and somewhat intimidating world of music. Music has been my life since I was 12 years old.  Now, at 37, there is still so much left for me to learn. That realization is what fuels and inspires me everyday to continue working on my craft.

Thanks so much for taking the time to read all of this!

Now, it’s time for me to go practice.